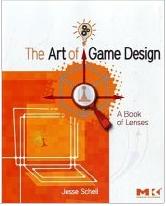 I’ve been reading The Art of Game Design: A Book of Lenses by Jesse Schell (which is wonderful), and there was a passage about imagination that I thought was really remarkable:

He goes on to give the example of a story:

“The mailman stole my car yesterday.”

Take a minute and run the movie of that story in your head.  What do you see?

Schell talks about the fact that you can picture the story — if asked, you can probably describe the mailman and the car, and the scene where it happens, including time of day, the weather, the color of the car.  You can even start assigning motives to the mailman, and describe the consequences of what happens next.  You didn’t need to be told any of that, and you don’t even need to work that hard to see it — most of it appears nearly effortlessly (it’s not the effortful kind of thinking we associate with creative design).

This ability to automatically fill gaps is very relevant for game design, for it means that our games don’t need to give every detail, and players will be able to fill in the rest.  The art comes in knowing what you should show the player, and what you should leave to their imagination. (p. 125)

Schell talks about how amazing this power of imagination is, and how incredibly flexible it is.  For example, imagine an armchair (another of Schell’s examples).

The fact that you can change your inner vision of the chair, largely effortlessly, is miraculous and mundane at the same time.

I thought of all of this when @bfchirpy sent me a link today for this posting from Russell Davies:

He talks about the idea of Barely Games – experiences that come from interacting with the world around you in a game-like way.  His games seem to have a game-like intent without the rigid structure.  He explains that the rules for these games are ambiguous, and that ambiguity is part of the experience (read the whole post – it’s worth it).

He talks about the role of Everyday Pretending in Barely Games, and explains that:

“Everyday Pretending is something you do with a bit of your brain, with the edges. It’s a thing of inattention, not concentration.”

What do you see?

I usually try to make sure that my blog posts have a lot of visuals, but I didn’t this time, because I didn’t want to interrupt your own mundane imagination when you were reading this.  I also usually try to include ideas for how to apply the topic to learning design, but I’m not going to do that either.

Here’s why — I want to you take something you are working on at present (a project or task – whatever it might be), and picture it.  Now, as gently as you possibly can (without regard for practical constraints – in the same way you can picture an armchair walking around a room), picture that project/task/work as a game.

(if you feel like playing, describe what you see in the comments)