About two weeks ago, Cammy Bean blogged about the eLearning Guild’s latest salary report.  In it, she referenced the significant gender pay gap:

According to research results, men on average make $10k more than woman.  Yes – even in the eLearning biz:

There continues to be a consistent gender gap in pay between men and women. On average, men are paid 14.5% more than women. This gap is most notable in part-time employee pay, where women receive an average hourly rate that is 49.4% lower than the rate men receive, while working a comparable number of hours.  (p. 25)

Well then. Needless to say, that really ticks me off…

Yep, ticks me off too.  For a whole slew of reasons, financial and otherwise. A few folks kicked this topic around on twitter a bit, and when Janet Clarey suggested a blog carnival on the topic, that seemed a better idea than the literal burning of things in outrage (although I’m not sure we’ve completely ruled that out).

A few days later, this article showed up in the New York Times: A Toolkit for Women Seeking a Raise. It has one of their nifty infographics: 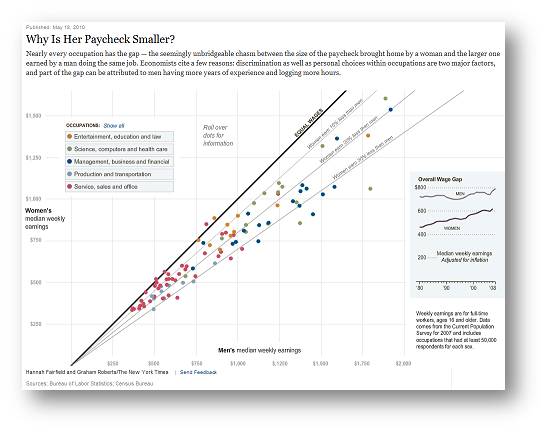 Lots of “ticked off” to be found there, too.  Clicking on job after job after job and seeing the wage gap on every one (I think there were 2-3 jobs where women weren’t paid less), was actually quite enraging.

Now, it would be easy to rage against the vast male conspiracy, and persistent sexism, and career paths that penalize motherhood.  And all of those things exist, in one form or another.

But, like any good instructional designer, I know that if you analyze the problem, you almost always find that it’s a bit more complicated than first appears.

There seem to be a few additional barriers that add considerably to the problem, like a “hero mindset” and a the difficulties around salary negotiation.

The New York Times article talks about the negotiation piece, and I will too, but let’s look at the hero mindset first. 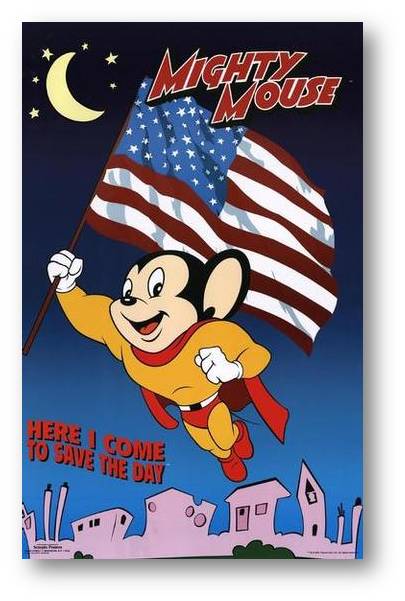 I used to work for a very good company that was trying hard to do the right thing in acknowledging and rewarding employee achievement, and they had an award that they would give out at quarterly meetings to recognize great employees.  The criteria for this award was “3 Heroic Acts.”  Anyone could nominate someone, and their supervisor would present the award, describing the heroic acts that person had performed.

I tried at one point to convince them to change the criteria, and explained at length why I thought “3 Exceptional Acts” or “3 Amazing Acts” would be better.

Here’s the problem with heroic acts – in order for someone to be all “Here I come to save the day!” there needs to be something wrong that means heroism is required.  This heroism almost always took the form of working crazy hours in response to a crisis.

Despite lots of advances, childcare still falls disproportionately on women.  Women who simply cannot work crazy hours in response to a crisis because they have to be at the daycare by six to pick up the kids before it closes.

Now, we could stop there, and acknowledge it’s really hard to be a working parent (of either gender), and be unhappy at that essential unfairness in the universe. But there’s more to it than that.

Some of the people who study these things have figured out that what happens frequently is that working mothers (and probably working dads with primary childcare responsibilities) know that they will not have the last-minute “out” of working a gazillion hours if a problem comes up.  They simply don’t have the “heroic” option. So, they have to make sure that problems don’t come up.

So they are doing a better job of managing workflow, and projects and so forth, because they have to. That’s a good thing, right?

Well, it would be, except my old company didn’t give any awards for “30 small acts of reasonableness.”  It’s better project management, and doesn’t burn out your workforce, and probably leads to better outcomes, but it’s just not sexy – it’s not flashy or impressive, and it doesn’t make you stand out as a superstar or prove you’d sweat blood for the company, and it’s not as memorable when it comes time for awards, raises or promotions.

“Academic research on gender and negotiation suggests that part of the unexplained gap may be tied, at least in part, to the negotiating process itself. It may be that some women have lower pay expectations. Men, on the other hand, have been found to be more likely to negotiate higher starting salaries.”

I absolutely think this is true.  Despite there being exceptions, I’m pretty sure that the majority of women are crap negotiators. We’ve been raised to be really fearful about not wanting to “make anybody mad.”

I know I’ve left money on the table.  I negotiate now, because I’ve read some of the literature about it, and so I force myself to do it.  It really is against my nature, and I know that I don’t negotiate as hard as I should (and I also feel guilty about it later).  It makes me nauseous, quite honestly. I’ve bullied female friends into negotiating, and many of them are as uncomfortable with it as I am.

Clay Shirky’s now infamous “A Rant About Women” addresses similar issues about women’s unwillingness to promote themselves, and argues that women need to put themselves forward with more confidence.

I think these things are true, and that women are paid less, promoted less, and recognized less because of it.

Here’s where my “ticked off” starts transforming into pure rage, though.

The source of said rage is what they say to do about it.

So, here’s my problem

The NY Times suggests things like “Be proactive…tailor your negotiations…try to envision what kinds of objections your boss may have.”

Clay Shirky observes:  “[Women] are bad at behaving like self-promoting narcissists, anti-social obsessives, or pompous blowhards, even a little bit, even temporarily, even when it would be in their best interests to do so.”

So, the message is basically “Women need to change their behavior” or, in other words, “Ladies, you are getting screwed and it’s YOUR OWN DAMN FAULT.”  (Um, where have we heard that before?)

Seriously, even the very smart woman from Harvard who researches this stuff isn’t (at least as far as I can see in the NY Times article) suggesting that organizations have a responsibility here.

Salary negotiations are a convention – they aren’t a fixed point in the universe. We traditionally (at least in the U.S.) negotiate for new cars, but we don’t negotiate for new refrigerators.  There’s no law that spells this out – it’s just a cultural construct. There are organizations where jobs pay what they pay based on rubrics around experience and qualifications, rather than on negotiations. The idea that salaries are negotiable during the hiring process is also just a cultural construct, but it’s a construct that is disproportionately disadvantaging up to half the potential workforce.

**Many women are are encultured to be at a disadvantage in salary negotiations, and many organizations are taking advantage of this to pay them less. **

Yes, women need to change their behavior, but I think the organizations need to own a much bigger share of this problem.  They aren’t going to want to (it will be costly to equalize wages), but we need to demand it, and hold their feet to the fire.

For what it’s worth, I think this an unconscious thing in most organizations, but that doesn’t let them off the hook.  Most people also have an unconscious desire to hire people who are like them (“Hey, you went to Grover Cleveland High School? Me too!”), but that impulse, though understandable, leads to pesky things like preferential and discriminatory hiring of people of the same race, gender and age (and lest you think this only happens to those unenlightened boxstore shift managers, be assured that this can happen to all sorts of people: http://blog.wantmag.com/public-thanks-and-public-apology).

And, just for good measure, here are a couple of other reasons why telling women they are the ones who need to change isn’t the whole answer:

Reason 1: When women do negotiate, they aren’t treated the same.

The NY Times article says “We have found that if a man and a woman both attempt to negotiate for higher pay, people find a woman who does this, compared to one who does not, significantly less attractive,” said Hannah Riley Bowles, an associate professor at Harvard’s Kennedy School of Government.”

And a report from the  Anita Borg Institute states “Because women’s assertiveness defy long-standing gender stereotypes, women often experience a “likeability penalty” when they are assertive.” So, someone is in a competitive hiring situation where it’s down to 2-3 candidates who are very well matched in experience and ability — is that where you really want to incur a “likeability penalty?”

Women frequently have different management styles, different persuasive styles, different ways of dealing with conflict, and that’s really okay.  In day in, day out workplaces, there is plenty of time to work this stuff out.  We can roll with the notion that everybody is different.  If you are a woman who struggles with assertiveness, you can figure out alternate strategies that get the job done (and this a good thing – do you really want a whole team of people acting like “self-promoting narcissists, anti-social obsessives, or pompous blowhards?” Really?).

When I was still doing project management, I was a masterful persuader – I could talk people around to my way of thinking and have them believing it was their idea all along (only in the most benevolent sense, of course), and I learned to rip the band-aid off conflicts as early as possible, to keep them from turning into horrible messes, which I had a harder time dealing with.

But the main thing was that I had time, and multiple opportunities to figure out solutions that worked for me.  Salary negotiations don’t happen often enough, and aren’t a transparent enough process to allow for “finding workarounds.”  They are a very vulnerable moment – incredibly high-pressure, make-or-break moments, that are based on a toe-to-toe, who-blinks-first model. In this way, salary negotiations are not like other workplace gender differences.

There are very few opportunities to fix it if what you tried didn’t work, and the repercussions can last for years or decades. Those subsequent pay increases? They are typically percentages, which only increase the inequity of disparate starting salaries over time (unless someone is deliberately correcting for pay inequities later).

I know that women need to step up, and I know that salary negotiations can be hard for men, too.  And I know that hiring managers (many of whom are women) and companies aren’t aware of  a lot of this, and aren’t trying to be the bad guys in these scenarios.

But here’s my bottom line on this:

Organizations that are paying women less just because they can are taking advantage of the situation, and are culpable in finding a solution — women cannot fix this just by “changing their behavior.”

</rant> – next week we will be back our regularly scheduled programming (maybe a new instructional design webcomic – I’m overdue for one of those).

This post is part of a blog carnival on the subject of the gender salary gap. Read more from Kelly Garber: Shark Attacks and Salary Reports, Janet Clarey: The Salary Gap In US E-Learning Industry, and Cammy Bean: eLearning Salary Gender Gap.