Okay, yes, I am overreaching in the title of the post, but it was satisfying to write that because I am so massively frustrated by this.  The question is this: academic publishing – who thinks this model works? 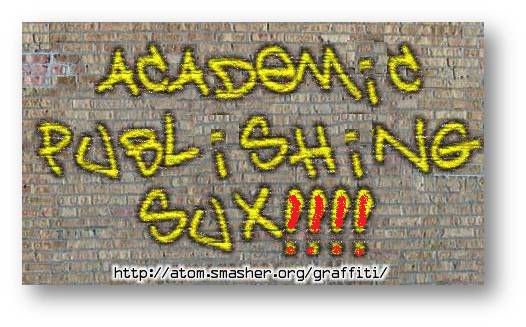 I was reading this blog post, and found myself nodding a lot

I was trying to look at an academic article the other day, and it was $30 for a 24-hr subscription to a fairly random, 15-yr old article.  Um, excuse me, but wtf?

What is this accomplishing? And who is the audience for this? If you are an academic for an institution, you either a) already have access because your institution is subscribed, or b) are not buying this article because it’s stupidly expensive (see blog post above).

I’m not an academic, but I am passionate about evidence-based practice, and I think this model is killing any impulse on the part of practitioners to make regular use of academic research.  We’ve rebuilt the Library of Alexandria online, and we are gate-keeping through greed (and not just greed, but stupid greed). We have a bigger repository of searchable knowledge than we could have imagined even 50 years ago, but the practitioners (i.e. the people who DO and MAKE stuff every day) are shut out of a lot of it.  Who knows? The solutions to the world’s problems could be there if more people could make use of it (there’s the “destroying civilization” tie-in).

We settle instead for it trickling down in mediated forms – TED talks, Malcolm Gladwell books, ScienceDaily.com – but this restricts the flow to what someone else thinks is important, and at best oversimplifies the information, and at worst distorts it.

I get (and have voiced) the argument that academic publishers are not wild centers of profitability, and do need to fund themselves.  I think this is true, but it’s not a compelling argument because it’s a stupid financial policy. 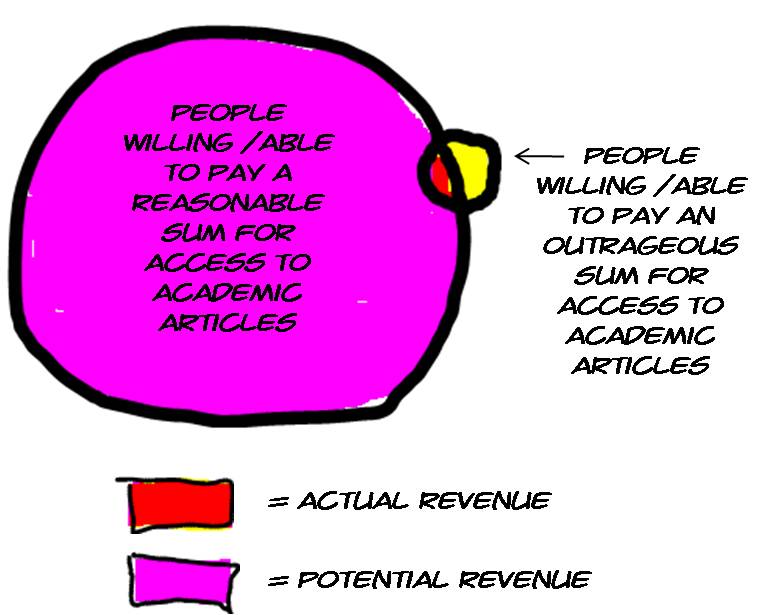 I do think they’d need to work kind of hard to realize that potential revenue because they’ve created a sense of learned helplessness in their potential audience.  But do the math — would you rather have:

I’ll admit that I’m making those numbers up, but try these (which I can back up):

And that’s a very conservative estimate based just on personal usage – I’ve worked on client projects where I could have happily justified expensing the purchase of a dozen articles as part of the research/analysis phase, but not at $30 a pop (especially since you frequently don’t know if the article is useful until you can see it).

If you make something hard, people will usually find ways around it: 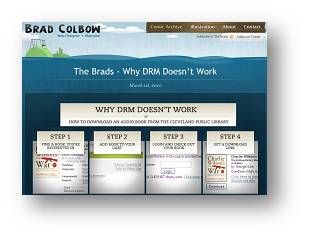 “Getting around it” works for things like music files – illegal file sharing was the only reasonable way to get digital music before iTunes made it easy and cheap to buy music online.  My fear, though, is that in this case people won’t find ways around it – they just won’t cultivate the habit of making use of the amazing wealth academic research as part of their professional practice (aaaand we are back to the destruction of civilization).

There are services like http://www.deepdyve.com/ which are doing pretty much *exactly* what I want, but I haven’t yet had a ton of luck finding specific articles on it (it works better for topic searching). And I fear it will fall in to the adoption chasm if the bigger publishers and services don’t get on board.

So, yes, I know the blog title is hyperbolic excess on my part, but this is so clearly a business model that hasn’t woken up and smelled the new millennium, and I think it’s getting worse, not better (a lot of things that wouldn’t have been firewalled a few years ago are finding their way into these expensive repositories).